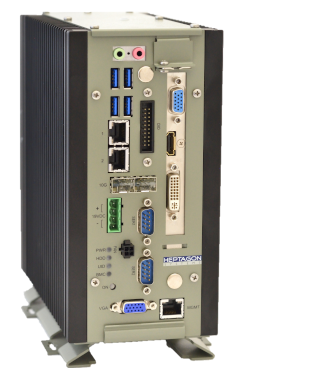 Following demand from customers who use the HQ-BOX in a vehicle, Heptagon Systems has designed a special mount for transportation applications. The mount, VMT1, is easily connected to the HQ-Box, providing for a fast and smooth adaptation of any HQ-Box to shock and vibration conditions.

The tests were conducted in accordance with ETSI standard ETS 300 019-1-5, Class 5M2. Judging by the test results, the HQ-Box can be adapted to match Class 5M3 and Military grade shock and vibration tests should there be a demand for it.

Follow this link for a short clip of the HQ-Box under test.

The HQ-Box is a Xeon-D®-based compact fanless industrial server.
The HQ-Box series is a first of its kind with unique capabilities no other embedded fanless server offers. Among them is the ability to connect six NVMe PCIe SSD, enabling six times faster performance compared to that of SATA drives. The Storage subsystem has up to four bays of U.2 2.5″ type of SSD, allowing ultra-fast storage with capacities of 36TB and more.
Another first of the HQ-Box is its ability to use the 65W high-end Xeon-D CPU, enabling Heptagon Systems to offer the highest performing Xeon-D server in the market.

Heptagon System’s headquartered in Melbourne, Australia is a startup which is dedicated to high-end embedded servers working in harsh environments . The company was established by veterans with many years of experience in the design of embedded PC. Heptagon Systems’ products can be used in a variety of industries and applications, such as IOT, MEC, Edge/Fog servers, mid-Storage servers, medical instrumentation, transportation, and industrial automation.